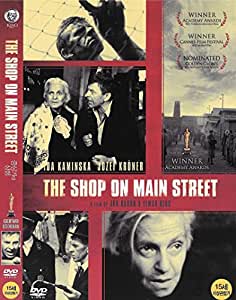 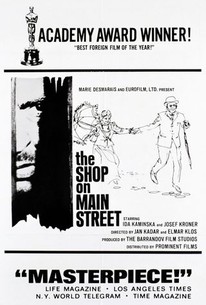 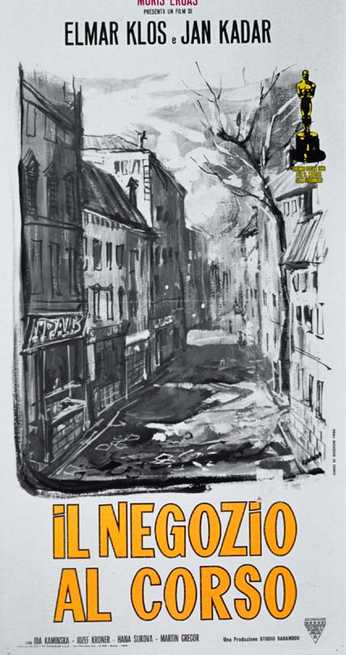 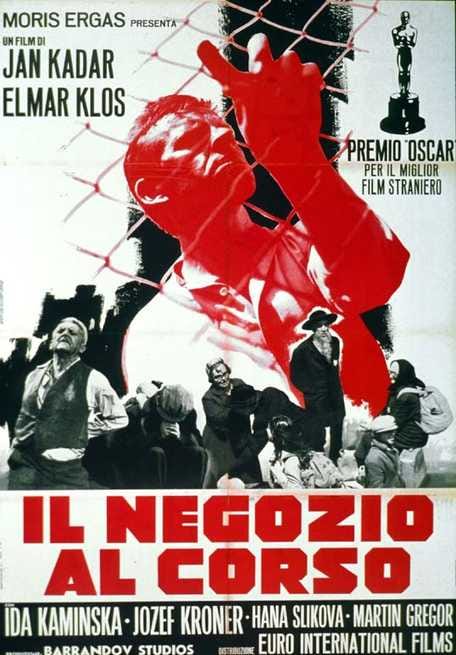 The Shop on Main Street

The film was written by Ladislav Grosman and directed by Ján Kadár and Elmar Klos. It was filmed with a Slovak cast on location in the town of It stars Jozef Kroner as the Slovak carpenter Tóno Brtko and legendary Polish actress Ida Kamińska as the Jewish widow Rozália Lautmannová.

The film won the 1965 Academy Award for Best Foreign Language Film, and Kamińska was nominated one year later for Best Actress in a Leading Role. It was entered into the 1965 Cannes Film Festival.

It is considered one of the most memorable films about the Shoah. A gorgeous film, very very touching and poetic. Brilliantly acted.

During World War II in a small town in the First Slovak Republic (a client state of Nazi Germany), mild-mannered Slovak carpenter Antonín “Tóno” Brtko is chosen by his brother-in-law, who holds an influential position in the local fascist government, to take over the sewing notions shop owned by the elderly Jewish widow Rozália Lautmannová as part of the Aryanization efforts in the country. Brtko struggles to explain to Lautmannová, who is nearly deaf and generally confused, the outside world and that he is now her supervisor.

Brtko lets Lautmannová continue to run things in her shop, spending most of his time fixing her furniture or ineptly trying to assist her with customers, and the pair begin to develop a close relationship. When he hears that the authorities are going to gather the Jewish citizenry of the town and transport them elsewhere en masse, he does not tell Lautmannová and at first considers hiding her. Drinking steadily, he eventually loses his nerve and attempts to cajole and then force Lautmannová to join her friends in the street. She finally recognizes that a pogrom is happening and panics. Brtko chases her around inside the shop, but he stops and feels ashamed of himself after he witnesses his other Jewish neighbors actually being carted away. Seeing some soldiers heading toward the shop, he throws Lautmannová, who is in a frenzy, into a closet to hide her. The soldiers just glance in the window and keep walking. When Brtko opens the closet door, he discovers Lautmannová’s dead body,[a] and, devastated, hangs himself. The movie ends with a fantasy sequence in which the now deceased Lautmannová and Brtko run and dance through the town square together.

By studying the Holocaust through only a few people and not on a large scale, it puts on it a human face.

Through the magnificent performances of Kroner and Kaminska, a star in the Yiddish theater who was born in Odessa, the film reaches great heights by showing how the ordinary person gets caught up in the conflicts of his time and is stuck trying to make the right choices. The pathetic carpenter, a Christian who just wants to be left alone to play with his dog and work with wood, becomes so confused when things are out of his control, that he’s not sure at the end if he’s capable of doing the morally right thing or of even knowing his own identity.

Country: Czechoslovakia
Release date: 1965
Directed by Ján Kadár and Elmar Klos
Starring: Ida Kamińska Jozef Kroner
Notes: Based on Ladislav Grosman’s short story “The Trap” (1962)
How to watch it: The DVD of this movie is on sale on Amazon